Eleri Darkins was brought up in Tredegar and began playing the harp when she was nine.  She has won numerous prizes at the National Eisteddfodau, scholarships and prizes.  Her performances on the harp have taken her around the world: USA, Hong Kong, Singapore, Thailand, Portugal, Greece, France and across the UK.  As a member of the National Youth Orchestras of Great Britain and Wales, Eleri has worked with many internationally renowned conductors including Matthias Bamert, Elgar Howarth and Christopher Adey.

In 2002, Eleri was appointed as harpist at the Tamnak Prathom Harp Centre, Bangkok, where she gave concerts and taught the harp.  The centre was founded by Khunying Sunida Kitiyakara in memory of her grandfather, Prince Chudadjuh, who played the harp.  Since returning from Thailand in 2005 Eleri has performed with the Welsh Sinfonia and the National Symphony Orchestra of Portugal as well as other solo concerts in the UK. In August 2012 Eleri returned to Bangkok to celebrate 10 years since the opening of the harp centre, there are over 60 students now studying the harp in Bangkok.

Eleri graduated in 1996 with First Class Honours in Music from University of Wales, Bangor, where she studied under Elinor Bennett, and won the Eric Morris Memorial Prize for the best final year recital.  While studying at Bangor she gained her ARCM and was chosen as a concerto soloist, performing Mathias’ Harp Concerto.  In 1997, completed a Postgraduate Certificate in Performance at Trinity College of Music, London studying with Sioned Williams.

Eleri has a great interest in the Triple Harp, especially playing traditional folk music from Wales.  She appears on the CD ‘Hiraeth’, ‘A Little Harp Music’ and ‘Ain’t Misbehavin’.  As part of the ‘Celtica Duo’ with oboist Gwenllian Davies, their CD ‘Tea for Two’ is also for sale. 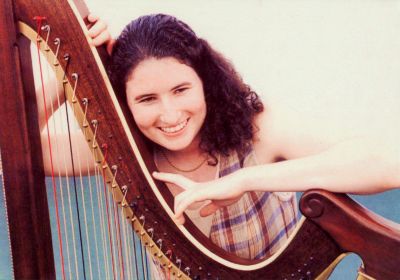 Eleri has a great interest in the Triple Harp, especially playing traditional Welsh folk music. She is very fortunate to have a ‘Gwalia’ Triple Harp made by John Weston Thomas. During 2001, she appeared on a television broadcast in Wales, ‘Cam Ymlaen’ and ‘O Flaen dy Lygaid’. Eleri played the Triple Harp at the opening of the National Assembly in Cardiff, in 1999. Later that year, she performed in California to launch the CD ‘Yn Iaith y Nefoedd – In the Language of Heaven’.

Charity work
I have been fortunate to be able to help with various charities.

‘…a delightful concert with a great performance on the harp.’

‘Her end recital was wonderful – the programme was most challenging and performed with great conviction and style.’

Director of Harp Studies at Trinity College of Music, London)

‘You play superbly and it’s a pleasure to have you perform with us.’